The head part has a comfortable 90 – 100 degree operational angle providing progressive more hot water to the right which is much more comfortable than a two lever wall mounted tap. Control stops are incorporated in the “S” connections. The advantage is that water to the mixer can be totally isolated when maintenance is required at that specific terminal point. The “Hospital Design Group” and “Infection Protection Control” are now specifying this tap feature as a prerequisite. 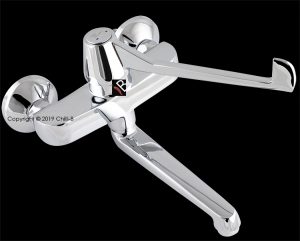 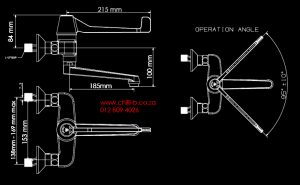 Euroeco Sequential single-lever basin mixer 1/2″ wall mounted medical mixer is suitable for commercial use. The ceramic cartridge is designed to provide less water with perfect flow thus saving on water. The mixer comes with adjustable flow rate limiter but not an adjustable temperature limiter. Adjustable minimum flow rate is 6 l/min. The swivel spout is lockable with flow straightener of 9 l/min. The spout has a projection of 256 mm which is suitable for most hospital surgeon scrub-up requirements. The elbow action lever is made from metal. The elbow action lever is 170 mm.  The inlet comes with standard S-unions with a width of 150 mm ±20 mm adjustable to each side. Minimum operating pressure is 1.0 bar or 100 kPa. Operation with un-pressurized storage heaters is not possible. If static pressure exceeds 5 bar, a pressure-reducing valve must be fitted. Avoid major pressure differences between hot and cold water supply 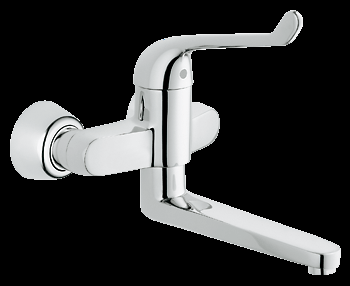 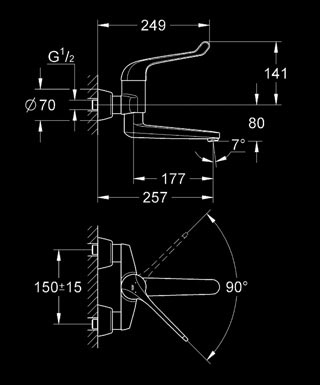 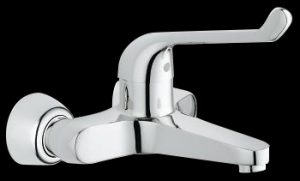 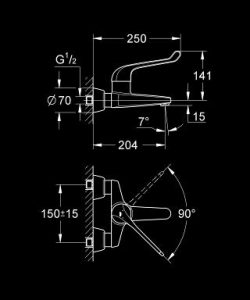 Grohtherm Ergomix is a wall mounted elbow action thermostatically controlled surgeon scrub-up mixer.  It comes with a comfortable metal 250 mm lever that is moved sequentially to increase water flow. The thermostat will limit the temperature automatically between 35°C and 45°C.  The spout can be swiveled 100° and has a projection of 238 mm. The internal mixer mechanism is made from industrial grade ceramic designed for heavy use.  The unit can be disinfected by activating the disinfecting mode which should be done at least once a month. Flow is limited to 9 l/min.  The unit also comes with non-return valves and dirt strainers for extra hygiene.

Surface mounted thermostatic mixers are designed for hot water supply via pressurized storage heater and utilized in this way provide the best temperature accuracy. With sufficient power (from 18 kW or 250 kcal/min) electric or gas instantaneous heaters are suitable. Thermostats cannot be used in connection with low pressure storage heaters. All thermostats are adjusted in the plant at a flow pressure on both sides of 3 bar.  If temperature deviations should exist due to special installation conditions, then the thermostat is to be adjusted to the local conditions (see Adjustment). At a flow pressure over 5 bar it is recommended that a pressure reducing valve be fitted in the supply line.

The Cobra 508 is an industrial wall mounted elbow action medical mixer. It is designed to be used in hospitals, clinics, doctors rooms and is even used in food processing factories. The long lever is designed so that the tap can be operated without your hands, which makes it so hygienic. The long lasting ceramic disc cartridge reduces maintenance and downtime. Ceramic cartridges also are less prone to leaking resulting in less water wastage. The elbow action lever is very easy to use: just move the arm to the left and mixer is closed, move of the lever to the right and the tap opens up, the more the lever moved to the right the more hot water is mixed with cold and temperature progressively increases. Swivel spout can be moved out of the way for full access to the bowl. 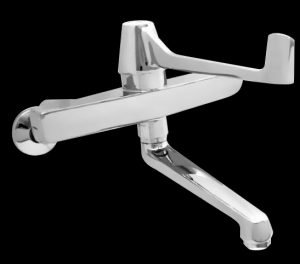 Tap is often used on MTS post mortem tables and in certain installations on catering sinks when they are used in laboratories. 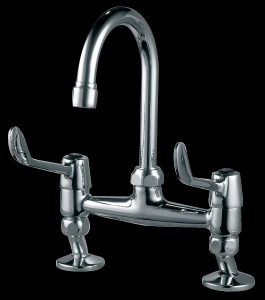 The 480HL comes in two versions, hot or cold. The hot water is installed on the left of a basin and the cold water pillar tap to the right.  These are 15 mm taps and works within 3 and 6 bar pressure. It is highly recommended to install a pressure regulating valve to control the pressure.  A dirt strainer is also recommended to ensure that the cartridges do not leak due to grit in the water. 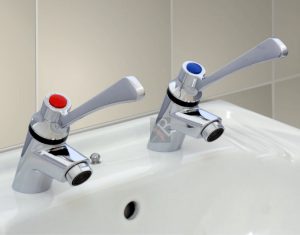 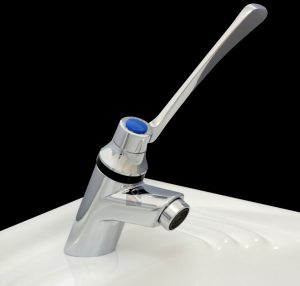 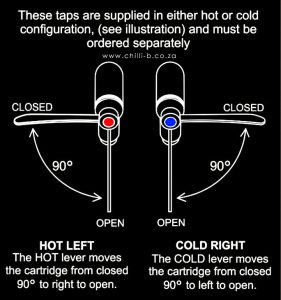 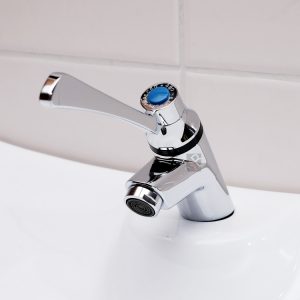 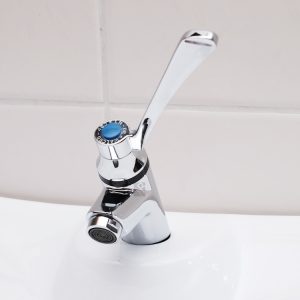 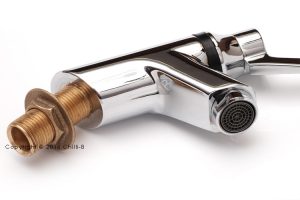 WC-180HL Range of taps. Inlet is 15 mm. Most braided pipes will fit this tap.